Turkey has a special allure. It’s a country steeped in ancient culture, but bursting with modern ideas. To take a trip through Turkey is to discover a place where east meets west and everything feels both old and new at the same time. Nowhere is that better displayed than in Istanbul – a very cosmopolitan city, just overflowing with history. For another stark contrast, visit the western and southern coasts of Turkey where Roman ruins lie not far from decked out beach resorts. And the interior of Turkey holds even more intrigue. Many tourists would agree that a trip to Turkey wouldn’t be complete without visiting the otherworldly fairy chimneys of Cappadocia.

What To Do in Istanbul: Top Attractions & Sights

11 Food You Must Try in Istanbul Turkey

10 Best Things to Do in Cappadocia Turkey

The climate in Turkey varies considerably from the coastline to the interior, but it’s generally best to avoid the extreme cold from December to April and the extreme heat from July to August. The best times to visit are in the spring and fall, when the weather is moderate – April & May or September-November.

We always travel on the shoulder season to avoid the crowds, and there can be some intense crowds in Turkey during the high season. If you’re like me, you’ll want to avoid July-mid September. We visited in early October before things started to close up for winter and found that the crowds were very manageable and we were able to get into everything we wanted to see without much of a wait. It was a little rainy, but otherwise the weather was great. You can get away with a trip to Istanbul during the colder months if that’s all you’re planning to do and you don’t mind the cold. 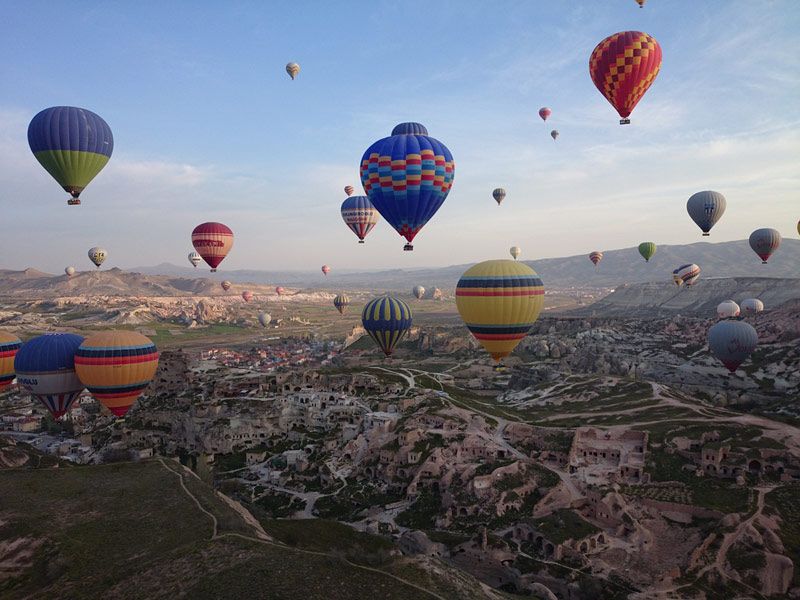 The top destinations to visit in Turkey are also the easiest to get around for non-Turkish speaking visitors. You’ll find that most people in these areas are quite used to tourists and they all speak at least a small about of English.

Istanbul is the main hub for air travel and small domestic airlines can sweep you out to other areas like Cappadocia and Ephesus for a decent price. We found that flying into Istanbul and heading directly on a one-way flight to Izmir (Ephesus) to see the Roman ruins and the coast, then another leg to Cappadocia for hiking through the valleys of fairy chimneys and a final leg to explore Istanbul was a great way to see a little of everything in a short amount of time. Of course, if you have longer, you’ll want to explore other parts of the country, like Pamukkale, Bodrum, Antalya, Ankara, Marmaris, and Alanya (see this guide for things to do in Alanya, Turkey).

There are so many things to do in Istanbul, from visiting historical landmarks to cruising along the Bosphorus. You could spend a whole week there and never run out of things to do. Read our 10 Ten Things to Do in Istanbul guide for more details. You’ll definitely want to check out Sultanahmet Square, tour the Blue Mosque and Hagia Sophia, visit the Grand and Spice Bazaars, take a Bosphorus Cruise and go on a food tour.

Cappadocia is a world of its own, with hiking through valleys that resemble a walk on the moon. Take a hike through Pigeon and Rose valleys, visit the Göreme open air museum and be sure to catch an early-morning hot air balloon ride for some of the most incredible up-close views of the fairy chimneys. One of the easiest ways to visit the top natural wonders is to hop on an organized tour. Check out our guide on the best ways to enjoy Cappadocia for more details.

If you’re planning to visit Ephesus, fly into Izmir and take the short drive down to the Roman Ruins. Prepare to spend the entire day exploring the ruins. Even though only 15% of the site has been uncovered, it’s still the largest excavated area in the world and is very well preserved. Get there as early as possible to avoid crowds (especially in the high season when cruise ships are docked). You can see it on your own, or go with a tour group, which also provides transportation and an informative guide.

In Ephesus, the most convenient place to stay is Selçuk, just 2 miles away. It’s the closest to Ephesus and you can even ride a bike provided by your hotel to Ephesus. There are plenty of small boutique hotels and restaurants. If you’re looking for a larger, higher class hotel, you’ll do well with Kusadasi, the cruise ship port located 11 miles from Ephesus. It’s also possible to stay in Izmir, the closest large city where the airport is located, and book transportation from there or rent a car and drive.

In Cappadocia, you’ll want to stay in a cave hotel for the uniqueness of the experience. Göreme is the largest of the small towns that made up the Cappadocia valley and is where you’ll find the bulk of tourism. There are dozens of hotels and restaurants to choose from and tours often leave from here, making it super convenient. Check out Kelebek Cave Hotel or Cappadocia Cave Suites. We chose to stay in Uçhısar, which we felt was the most charming of the towns. Built entirely up on a mountain, Uçhısar felt the most unique and quaint. You’ll find the ultra-plush Cappadocia Cave Resort and Spa here, as well as Argos in Cappadocia, which was built on the site of an ancient monestary and has allowed for the rebuilding of dozens of historical dwellings, underground tunnels and caves in Uçhısar. There’s even a wine cellar on the premises that you can tour to get a sense of the history of the area.

In Istanbul, you could stay in the historical area of the city, near the Blue Mosque, where there are lots of boutique hotels that resemble houses on the lower part of town. You can walk easily from here to all of the historical locations and have the Blue Mosque as a point of reference and amazing backdrop. We stayed at Hotel Seraglio, which was just a few blocks below the Blue Mosque and we thought it was fantastic. They even have a suite on the top floor with a view of the Blue Mosque from your private balcony. Also check out the Muyan Suites. The rooms are small, but that’s expected in the heart of the city. For the larger, higher class hotels, you’ll have to go to the more modern section of town, near Taksim or along the Bosphorus. That is where you’ll find the Four Seasons, The Ritz-Carlton and other large hotel chains.

Turkish cuisine combines the flavors of the Mediterranean with Asian and Arabic influences. A meal is often started with cold or warm appetizers called mezes that includes olives, pickles, grilled vegetables and lots of dips and spreads. Dinner is often served with lavash, a puffed up bread with a crispy exterior. When you poke the middle, the bread deflates and is quite handy for scooping or sopping up sauce.

For a main dish, order whole crispy fish, manti (handmade dumplings with yogurt sauce) or kebab in one of its many forms. My favorite is döner kebap, which is thinly shaved from the rotating spit and sometimes served on pita bread with lettuce and sauce, which is called Dürüm. Köfte and şişkebab are other forms you’ll find. Pide, pita bread with melted cheese and toppings, like pizza, can also be found on most menus.

For dessert there’s the famous Turkish Delight in an astonishing array of flavors and the much loved sticky sweet baklava and it’s many variations. On the street, you’ll find vendors selling simit (a pretzel shaped bread with the consistency of a bagel), freshly squeezed pomegranate juice and Turkish ice cream made with mastic, a resin that gives the ice cream a gummy elasticity. It’s really fun to watch the vendor handing out ice cream cones to unsuspecting customers.

There is so much variety in Turkish food. You won’t run out of new things to try. For more on Turkish food, read about our Istanbul food tour.

The most prevalent drink in Turkey is strong black tea, called çay (chai), served in a clear, tulip-shaped glass. Tea is drank all day in Turkey and is a very important part of Turkish culture. Offering tea to guests is a sign of friendship and hospitality and you may be offered tea in a shop if you’re sticking around to make a purchase.

Turkish coffee is also enjoyed throughout the day. It is made by roasting and finely grinding the coffee beans, then allowing them to boil in the pot. When the coffee is served, the grounds settle to the bottom.

The most popular alcoholic drink in Turkey is Raki. It is a grape brandy (like grappa) that has a strong anise flavor. It is often served as an aperitif, or with meze at dinner. You’ll find it served in a tall glass, mixed with water and ice, which turns the clear liquid white.

Wine isn’t often drank in Turkey and can be quite expensive when purchased with a meal. While you can find it in most restaurants, there are restrictions on the sale and purchase of alcohol. Turkey does produce some wines, especially in the Cappadocia area, but most of the wine sold in restaurants is imported and expensive. It’s easiest to stick to drinking tea and coffee, and maybe bring a bottle of wine from the airport to enjoy in the evenings in your hotel room.

Disclaimer: This page contains affiliate links that earn us a small commission when you use them, at no extra charge to you.