All a traveler wants is a beautiful place to collect moments, and India is such a place. The country is an assortment of world famous places, each carrying its own enigma and its own story. The top landmarks in India include forts and palaces, monuments, mountain ranges, caves and so much more.

While there are many tourist places in India, here are our picks for the top 10 famous places to visit in India. If you’re planning a week or more trip to India, you’ll want to add as many of these great attractions to your itinerary as possible, to see the reason why India is so special.

Get ready for this crazy awesome journey that you will never forgot! India isn’t just somewhere you visit, it’s somewhere you experience.

» We have a great 7-day itinerary of the Golden Triangle in the northwest of India. If you’re looking for a longer, more extensive itinerary, try this 2-week India itinerary that’s perfect for first timers to India.

» Be sure to read our guide on eating in India to learn all the dos and don’ts before you go.

Where to Visit in India

The Taj Mahal is an architecturally stunning symbol of eternal love and devotion, and undeniably the most fascinating piece of craftsmanship in India. This architectural gem is not just the most treasured monument in the country, but a UNESCO World Heritage Site that has been listed as one of the new Seven Wonders of the World.

They got married in the year 1612, and Mumtaz Mahal died in 1631 while giving birth to her 14th child. The construction of Taj Mahal started on that very year, i.e. 1631. It took approximately 22,000 laborers, 1,000 elephants and about 22 years to complete this time-defying monument. It attracts over 10 million visitors annually and is a must-visit destination in Northern India.

>> Read more about planning your visit to the Taj Mahal.

Sundarbans is the home to largest mangrove forests in the world. Resting itself on the delta of the Ganges, Brahmaputra and Meghna rivers on the Bay of Bengal, Sunderban national park offers a protective area for the Royal Bengal Tigers.

The rich Bengali history and culture witnessed here makes it a must visit places at least once in a lifetime. The three wildlife sanctuaries located in the Sunderbans cover an area of roughly 140,000 hectares and are considered core breeding areas for a number of endangered species.

You can visit this remote area to explore the mangrove forest and see the fauna and flora for yourself. If visiting from India, you can take a boat excursion from Kolkata, which is best to do as either a 2-day or overnight trip (or longer). Check out the Sunderban Tiger Camp for more information.

These beautiful coral reefs stretch over an area of 11,000 sq km in the Andaman Islands and are home to some of the most spectacular species of marine life in the world. The vast array of sea creatures you can see underwater, surrounding the coral reefs is staggering. It’s something you’ll never forget.

The tourist season generally starts at the Andaman Islands in October and extends through to mid-June. The peak time to visit is between December and March, though February and March are the most temperate and best times to visit.

The Thar Desert (also known as the Great Indian Desert) is the 17th largest desert in the world, spread across cities from Rajasthan to Gujarat, Punjab and Haryana. It encompasses a combination of the solitude of the countryside and the dense population of Rajasthan.

You might be wondering what there is to do for tourists in the middle of a vast desert, but you’d be surprised. There are desert camps set up in the middle of the vast expanse where you can go dune bashing, parasailing, and camel riding.

It’s a whole experience that will enthrall you, especially with its midnight star gazing and sunsets/sunrises. This tour company specializes is desert tours in the Thar Desert. Take a look at all the possibilities to have a unique and interesting night in the desert.

Also, known as the ‘Land of Passes’, Ladakh along with its popular capital city, Leh is one of the most prominent travel destinations for road trip aficionados and spiritual explorers in India.  Ladakh is located between two of the world’s biggest mountain ranges, the Himalaya Mountains and the Karakoram.

It’s an area full of peaks and valleys, lakes, waterfalls, and a lot of wildlife. In turn, that makes it an adventure playground for outdoor enthusiasts. In this area, you can go climbing, take jeeps tours, go white-water rafting and take high-altitude treks, among a plethora of other activities.

In the city of Leh, you’ll also find Leh Palace and many awe-inspiring monasteries. Leh is at an altitude of 11,562 ft and is connected to other areas by a winding and steep highway that makes for a very interesting road trip.

This 1,600-km-wide mountain range extends from Gujarat to Kanyakumari. It’s older than the Himalayas range and runs across the west coast of India. It is a UNESCO World Heritage Site and is one of the eight “hottest hot-spots” of biological diversity in the world, according to Wikipedia.

This mountain range is home to many animals and species that only exist in India. It’s the place to visit if you’re into wildlife. There are 7,402 species of flowering plants, 1,814 species of non-flowering plants, 139 mammal species, 508 bird species, 179 amphibian species, 6,000 insects species and 290 freshwater fish species.

Since the area is so large, you’ll need to plan to spend at least a week or longer to explore it properly. You can concentrate on just one specialisty, like birding or cycling. Kerala and Tamil Nadu are popular starting points for those touring independently. A tour is the way to go if you want to see a lot, including hikes, safaris and rail trips.

You may not know this, but Goa was actually a colony of Portugal up until 1961, and a strong Portuguese influence still remains. Old Goa is home to the massive, Portuguese-style Se Cathedral and the baroque Basilica of Bom Jesus.

The beaches at Baga, Calangute, and Palolem are some of the best locations for visitors to stay with a huge array of nightlife, hotels, and restaurants. You’ll also want to visit the famous Saturday night market. The laid-back fishing villages such as Agonda are also popular.

The Golden Temple, also known as Sri Harmandir Sahib, is the most significant shrine in Sikhism. It is named the Golden Temple because of the gold leaf-covered sanctum center of the complex, which includes a number of different buildings surrounding the sanctum and the pool. This majestic temple is a must-visit attraction in India.

Not only is it architecturally stunning, but the atmosphere surrounding it is unparalleled. Built in 1604 the Golden Temple sits lower than its surrounding buildings and has 4 entrances which symbolize the fact that anyone is welcome no matter where you come from or what you believe. Surrounded by water and glistening with gold, this must be on your itinerary.

Situated in Aurangabad, Maharashtra, Ajanta & Ellora Caves are the finest depictions of Buddhist art dating to 2nd century BC. Both are an important UNESCO World Heritage site.

There are 34 caves at Ellora dating from between the 6th and 11th centuries AD, and 29 caves at Ajanta dating back to between the 2nd century BC and 6th century AD.

Amidst the caves, there are murals, paintings and intricate carvings that imply many facts about ancient India. Owing to its historical significance, these caves attract a plethora of tourists to visit Aurangabad every year.

Despite the name, the Kerala Backwaters are peaceful and picturesque palm-lined network of lagoons, lakes, rivers, and canals that run inland from the coast of Kerala, from Kochi (Cochin) to Kollam (Quilon) in India.

The endless stretches of backwaters, tall standing coconut trees and grandeur of greenery makes destinations in Kerala a perfect location to sit back and relax. A number of houseboats, ferryboats and cruises are available for an amazing drive over.

Most people who visit the Kerala backwaters hire a traditional Kerala-style houseboat and float around the narrow waterways. You can book tours of the area for just a day, or stay on the houseboat overnight. In the surrounding area, there are plenty of hotels and resorts where you can extend your stay in Kerala.

These Top 10 world famous destinations in India truly deserve to be on your list whether you are an avid traveler or just starting your journey. So, why wait anymore, just pack your bags and give it a go! 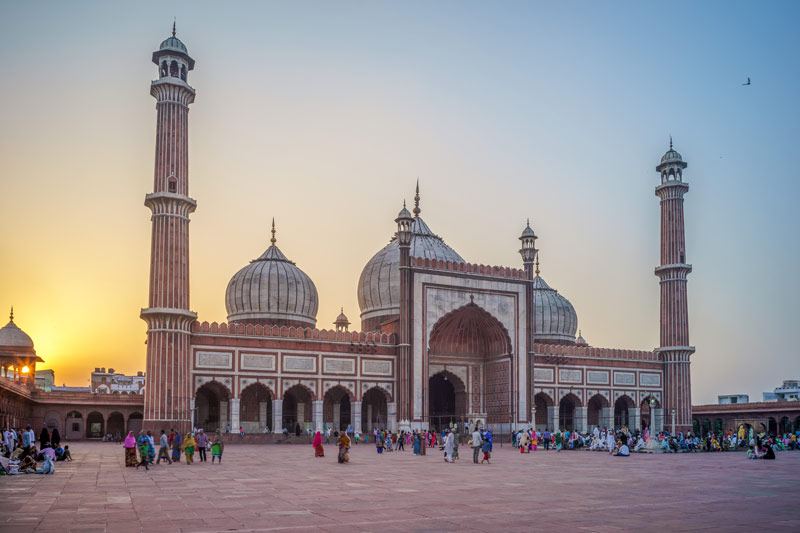 7-Day Tour of the Golden Triangle in India

Guide To Planning a Railway Holiday In India

Guide to Visiting the Taj Mahal in India

11 thoughts on “10 World Famous Places to Visit in India”